Continuing to foster the connection between people and the land through post-secondary education.

The Yukon Fish & Wildlife Management Board offers TWO $2,000 scholarships to students interested in continuing the connection between people and the land through post-secondary educational training (university and college).

Submit a 1000-word essay outlining what significance the Yukon’s wilderness holds for you and how your field of study will enable you to continue sharing the land with fish and wildlife in a significant way.
For example: you are pursuing a Science degree to conduct wildlife research; or an Arts degree to write poetry inspired by northern landscapes; or your Business degree will help you do business that contributes to a healthy environment.

Submit your essay, a copy of your transcripts, and a letter of acceptance to a post-secondary institution

You must be a Yukon resident and currently enrolled in a post-secondary institution to be eligible for this scholarship.

You can also submit your application to the following: 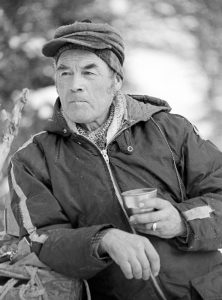 The Yukon Fish and Wildlife Management Board is honoured to recognize the late Alex Van Bibber with a scholarship in his name, the Alex Van Bibber Sharing the Land Scholarship. Alex was an extraordinary Yukoner who deeply respected the land, fish, and wildlife, and who shared his respect and knowledge with all those who knew him. The Board hopes to continue his legacy of sharing the land through this scholarship.

Alex Van Bibber lived a lifetime on the land. He was born and raised under the McArthur Mountains along the Pelly River. His parents taught Alex and his siblings at an early age to be independent, self- reliant and bush savvy. The family hunted, trapped, fished, picked berries, harvested logs for firewood and building and planted large gardens. Their lives were intricately linked to the land, building a strong sense of stewardship.

Throughout his youth, Alex walked, snowshoed, paddled and drove a dog team over much of Yukon’s north, often travelling alone or with a brother. In his lifetime, he witnessed changes in technology and participated in events that shaped the territory’s recent history. Alex’s outdoor skills were called upon frequently and by many. Supplying the necessary horses, he guided army engineers surveying a railway line through Yukon’s Tintina Trench. He also guided a dog team supported expedition looking for an alternative route for the Canol pipeline from Mayo to Norman Wells. He supported Presidential candidate, Bobbie Kennedy, during his ascent of the mountain named in honour of his brother, President John Kennedy. He assisted with hydrometric surveys during winter throughout the territory, flying into numerous remote river locations. On one such survey, the plane crashed and though injured himself, Alex took care of his co-worker and the pilot in extreme cold until rescued days later.

Alex was a big game outfitter and world renowned big game guide. He was actively guiding well into his 80’s. He was a skilled trapper and was instrumental in developing a trapper training program that is still in demand in Yukon today. He was a much loved and respected trapper educator, and tireless promoter of responsible, humane trapping. He believed in wise use. He was invited by other jurisdictions, including Alaska, Northwest Territories and British Columbia to assist them in the delivery of their trapper training programs. Alex was running his trapline well into his 98th year.

Alex never turned down a request to teach and share his knowledge of the land, wildlife, and how people are linked to and benefit from a healthy ecosystem. He particularly enjoyed sharing stories with young people and teaching them techniques for surviving in, and enjoying the wilds. His favourite refrain was “an outdoor life is a healthy life”.